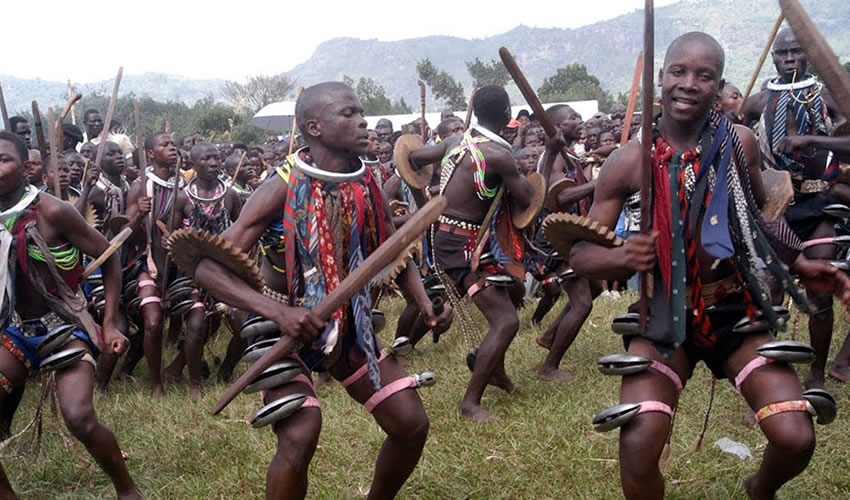 The Imbalu Circumcision in Uganda takes place every even year and is characterized by singing, drumming, electric dancing, beer parties and happiness. The Bagisu call it Imbalu. Here, mass circumcision of males is done. It is at the pivot of culture. The official first day of the circumcision season is on 1 August.

Loosely explained, the natives (Bagisu) in the eastern part of Uganda around the foothills of the oldest volcanic mountains in Africa believe all men must undergo circumcision and unless a male from this land undergoes this important cultural rite, he will never dine at the table of men or participate in tribal meetings. Imbalu Circumcision in Uganda is embedded in their culture that even before one is buried, there must be confirmation of his manhood status. If he was not circumcised, then this has to be done to make him whole.

Imbalu Circumcision in Uganda takes place every even year for instance 2016,2018,2020 and is characterised by singing, drumming, electric dancing, beer parties and general happiness. Traditionally, the circumcision season is welcomed by the appearance of a bird whose chuckles usher the mood of the festival. Upon hearing the bird, the elders farther under the clan tree and then begin preparing and grooming the candidates for the rituals, which last for 3 days.

On the first day the young man is smeared with sorghum paste all over his body. He wears traditional dress of animals kind and a head dress, puts heavy bangles on each leg and then visits his relatives, singing and dancing. The songs are full of praise to his forefathers. He does this as he stops and leaps high in the air.

A hair cut and bath is granted to him on day 2. This is the time when the moment of transition draws nearer. The hair cut and bath symbolises an end to his past and a welcome to the new life. Just like before, the sorghum paste is again smeared on his body. The singing, chanting and dancing continues and this evening is a village celebration.

Just before the African sun rises in the east, the young man wakes at first light on the morning of the circumcision and is again smeared with sorghum paste. He then visits his maternal uncles, who present to him gifts of cows and goats, which are part of the bride price paid by his father. Later in the day he is taken down to the river by the men who wash him thoroughly from the waist to the knees. He is then brought at a slow pace to the ground that is traditionally used for these ceremonies. On the ground is a Y-shaped stick, which he picks up and holds behind his head. The blade strikes the foreskin of his genitals and the circumcision is quickly over. A whistle is blown to announce that the candidate has been successful. There is no room for cowardice because it yields to disgrace of manhood.

Imbalu Circumcision in Uganda is a once in a life time cultural experience of the Bagisu and is country wide celebration that extends to parts of Western Kenya.

Uganda is known to many as the Pearl of Africa thanks to Winston S. Churchhill…

Karamojong Cultural Visit, Cultural visit to the Karamojong in Uganda