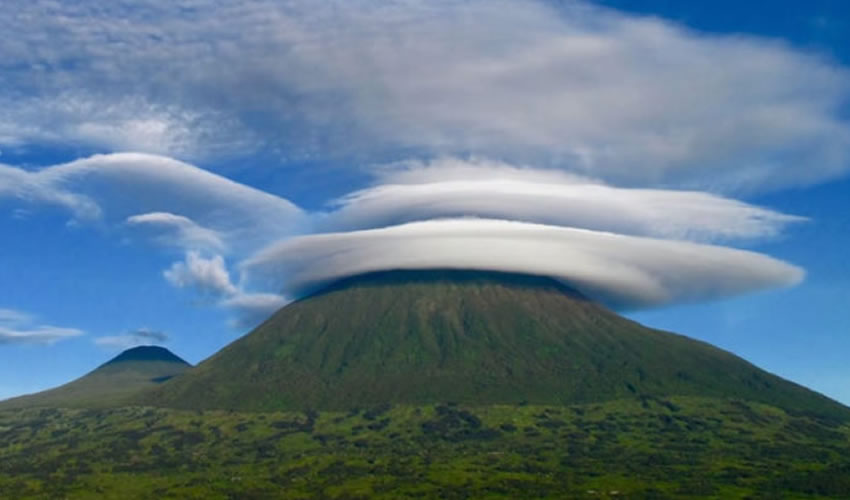 Mount Karisimbi is a strato volcano found in Virunga Mountains on the border between Rwanda and DRC. It’s currently dormant. At 4,507 meters, Karisimbi is the highest of the eight major mountains of the mountain range, which is a part of the Albertine Rift, the western branch of the East African Rift. Karisimbi is flanked by Mikeno, Bisoke to the east and the Nyiragongo to the west, on the other side of the rift valley. Karisimbi is the 11th highest mountain in Africa. Hiking Mount Karisimbi in Rwanda is indeed a great experience. The name Karisimbi comes from the word Amasimbi in the local language, Kinyarwanda which means snow. Snow can mostly be found during the dry season in June, July and August on the top of the Volcano. Between Karisimbi and Bisoke is the Karisoke research center, which was founded by Dian Fossey in order to see the mountain gorillas living in the area.

Hiking to the top of Mt Karisimbi is one of the many tourism activities you should not miss on your safari to Rwanda’s Volcanoes National Park. It raises at an elevation of about 4507m above sea level is Mount Karisimbi, which is a strato volcano and it’s the highest of the eight major volcanoes of the Virunga field and the 5th highest in Africa. It extends along the border between DRC and Rwanda on the western branch of the African Rift valley. The Karisimbi lavas have indicated that the volcano is very young. Hiking Mount Karisimbi is active yet very rewarding and it’s normally done as a complement to gorilla trekking and all are carried out with in Volcanoes National Park. This hike starts so early in the morning and takes 6 hours going through the Bisoke side before arriving the first stopping place  at an altitude of 3700m for an overnight camping before finishing off the journey the next day.

Hiking Mount Karisimbi in Rwanda is not something ordinary and it affords sights of many birds, primates like the monkeys nad mountain gorillas since the volcano lies in the Primate park of Parc National Des Volcano. It’s known for its foreign plants in its four belts of vegetation, from the dense forests at its base to the very barren volcanic core at the summit. This hike is characterized of the muddy trails most especially during rainy season, though due to the altitude, it can rain at any time of the day. You as well need good health and stamina to hike through the slippery slopes to arrive the summit which is white capped as the result of hail and sleet which occurs in the higher elevations from its frequent storms. This also means that one may have to incur an extra cost of hiring a porter which is $20 per day to help with carrying your luggage and hiking equipments. Karisimbi volcano is close to the Karisoke research center where the grave of the re known mountain gorilla conservationist Dian Fossey lies. This also means that one has got a chance to visit the grave and also track the golden monkeys in addition to the mountain gorillas.

Many tourists on Rwanda Safaris have shown interest in taking part in hiking Mount Karisimbi in Rwanda. The hike to and descent from Mount Kirisimbi is completed in 2 days starting very early in the morning by 7:00 am. The hikers need to go to the head quarters to register and get briefing from the park guides and guides. After having briefing, the hikers are driven to the starting point at the foot of Mount Bisoke. Ascending to the summit only lasts for 7 hours at most and the hikers need to stop mid way at an altitude of 3,700m for the night. The camp is always set where dinner is prepared and served; you will rest here as you wait for the next climb the next day. After the night and having breakfast the next morning, hikers should be fresh to start ascending to the summit which takes an hour. The trail from the camp to the summit is so steep and more difficult to navigate as the mud gets thicker, winds stronger and the fog reduces the visibility.

Once you reach the top of the summit, the scenery is so spectacular and beautiful to behold. Hikers should have great views of the Muhabura volcano, the Nyiragongo, the Nyamulagira volcano, the large and great forests and vegetation in the Virunga ranges and the Congolese border. After viewing the great scenery and views, Hikers should get ready for the 6 hour descent back to the starting point and then to the park offices.

The Packing list and tips for hiking Mount Karisimbi in Rwanda includes; good looking shoes, a sweater/ warm clothing, waterproof heavy jacket, a hat with a walking stick, A tent for overnight camping, a sleeping bag, packed food for the night stay before reaching the summit, porters to carry the backpack, tents, cameras and other equipment.

The hiking permits are acquired from the park head quarters. It’s possible to get the permits on the day of the hike but it’s recommended that you book in advance just to make sure that they are expecting you. Hiking Mount Karisimbi in Rwanda costs % $400 per person. A tour operator can help you arrange the entire tour by providing transportation, booking accommodation and securing hiking permits. It’s also recommended that you hike Karisimbi volcano alongside gorilla tracking for those with enough stamina. Contact us for any more information about hiking Mount Karisimbi.

Uganda has conducive all year climate, without a doubt she plays host to migrant bird…

© 2021 African Pearl Safaris. All Rights Reserved.
error: Content is protected !!
Back To Top
×