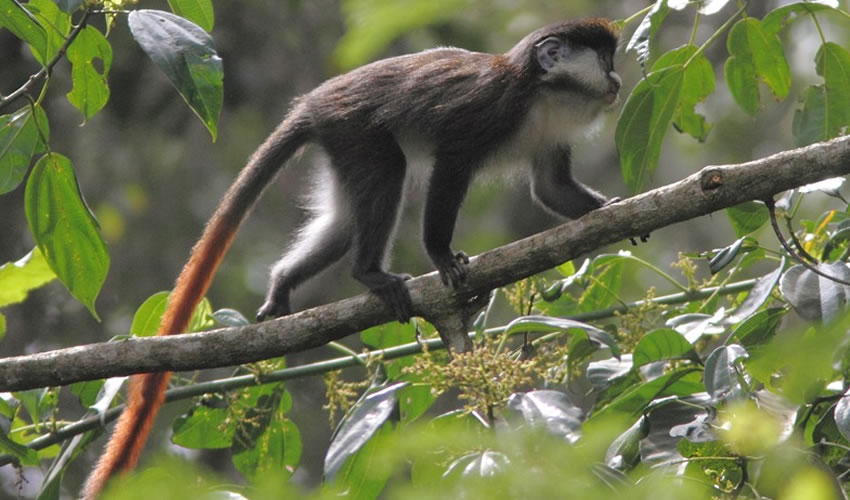 Red-tailed Monkeys in Uganda are scientifically called Cercopithecus Ascanius. They live in groups or families dominated by an alpha male. The groups are always made of about 20 to 30 members, with the majority being females.

The species make noise to alert fellow members of any potential danger within their territories. Red-tails can reach 17 inches in length and weigh up to 10 kgs, with males bigger than females. The name “red-tail” comes from the brownish-reddish fur on their tail. They have a black face, long hind legs, large white cheek pouches, a yellow-brown coat, a round head with bluish skin around the eyes and a white nose.

The cheek pouches are used to store food, while the long tail assists in their movement on trees. They use nose-to-nose touching as a greeting sign. They open their eyes widely, raise eyebrows and nod their heads when they want to chase any outsider from their territory.

The biggest enemies of Red-tailed monkeys are chimpanzees, leopards and eagles, which eat them. Other threats include deforestation, and farmers who kill them to protect their crops like maize, bananas and millet. Red-tailed Monkeys in Uganda mainly feed on fruits, plants, flowers and insects.

They reach sexual maturity at four years in females and six months in males. Their pregnancies last six months and they give birth to a single offspring. All other females in the group are responsible for raising the young ones. Females always stick to their family groups while grown up males leave the groups to form their own groups.

The species can survive up to 20 years in the wild and longer in captivity. They are found in Kibaale Forest, Bwindi Impenetrable Forest, Queen Elizabeth National Park and Semliki. The species mainly survive in the tropical rain forests, low land and swampy forests.

The Gem of Wildlife in Murchison Falls National Park.

Reptile Village in Entebbe was established in 2002 by Yasin Kazibwe, a reptile expert who has…