Mount Elgon National Park is located in Eastern region of Uganda near Mbale City and it is divided into two (Uganda part and Kenya part) since it shares the borders between Uganda and Kenya. It acts as a source of water like the Nzoia River which flows to Lake Victoria in Uganda and the Turkwel River which is known as Suam River in Uganda side, also ascends and drops its water to Lake Turkana in Kenya not forgetting the and Sasa River. The Sipi River also originates from the Mountain forming the Sipi Falls and it is the most visited falls in the Eastern region. 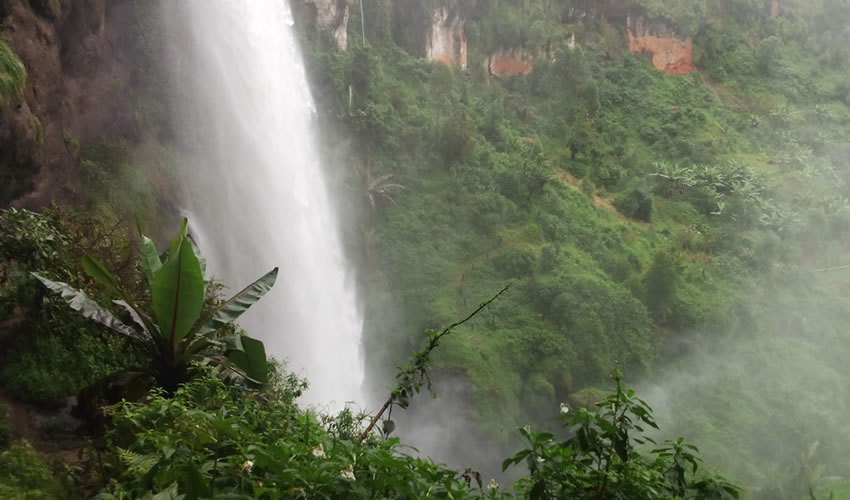 Mount Elgon National Park which is also known as the extinct volcano is one of the oldest physical features in Uganda said to have erupted 24 million years ago. The park was once the highest Mountain in the African continent exceeding the Mountain Kilimanjaro of Tanzania with 5,895m but due to constant erosion, the Mountain Elgon has reduced its height to 4,321m relegating it to the 4th highest peak in East Africa and 8th on the African continent.

Mount Elgon National Park has several peaks, the highest being the wagagai peak with 4,321m, followed by the Kiongo peak with 4,303m, also the Mubiyi peak at 4,210, and Jackson’s summit at 4,165m. The Bagisu and Sabiny are the native and inhabitants of Mount Elgon and they locally refer to the Mountain as Mountain Masaba. It is because the Bagisu believe that there ancestor Masaba comes from one of the caves of the Mountain back in the centuries hence the name Mountain Masaba. 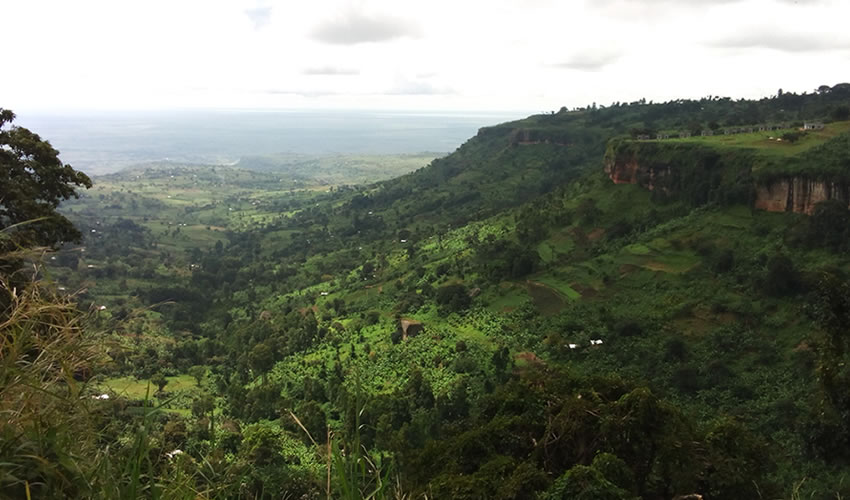 The slopes of Mount Elgon supports a variety of vegetation varying from Montane forest to high open moorland with giant lobelia, and groundsel plants. The Mountain slopes are covered with Olive trees; at higher altitudes changes to bamboo forest zone and higher zone consist of Moorland with heaths.

Mount Elgon has the largest volcanic base in the world especially at the height of 4,000km² and it is also the oldest and largest solitary Volcanic Mountain in East Africa. The park hosts over 300 species of birds including the endangered Lammergeyer, Jackson’s spur fowl, eastern bronze-naped pigeon, Hartlaub’s turaco and Tacazze sunbird. The higher slopes are protected by national parks in Uganda and Kenya, creating an extensive trans-boundary conservation area which has been declared by UNESCO. The park also has very many animals’ species like the forest elephants and buffaloes can be spotted on the lower slopes, antelopes and duikers are often seen not forgetting the black and white colobus monkey and blue monkey. Red tailed monkey have been reported after being thought to be locally extinct.

This Mount Elgon Hiking Safari takes you to Mount Elgon which has the largest surface area any extinct Volcano has ever had in the world. The mountain rises through a series of gradual slopes punctuated by steep cliffs to a height of 4,321 m above sea level. The volcanic foothills, cliffs, caves gorges and waterfalls combine with panoramic views across wide plains to create some of the most spectacular scenery in Uganda. Mount Elgon Hiking Safari is one of the most popular mountain hiking safaris in Uganda.

On a Mount Elgon Hiking Safari, it’s not recommendable to climb during long rains, which are in April and May. Climbers should first head for the village of Budadiri where the climb begins. The Mount Elgon National Park office can arrange the climb for you with guides, porters, food etc. Climbers who wish to get to the top are expected to climb for four days. 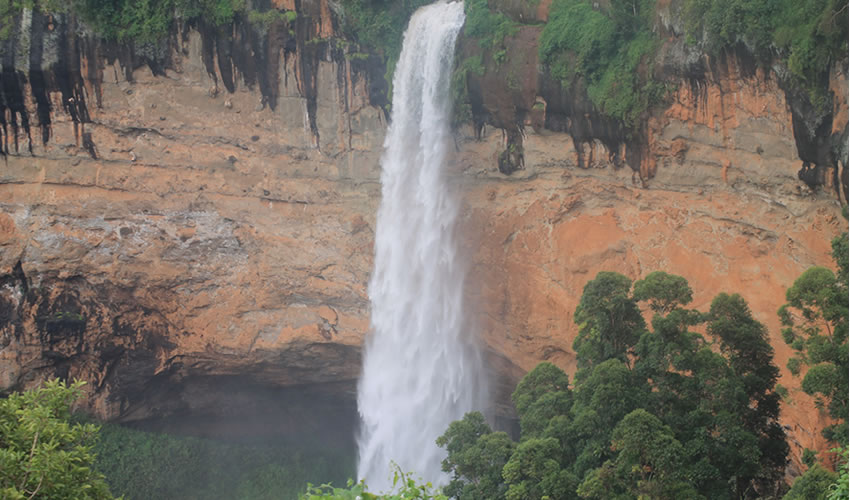 There are two main trails: the Sasa trail, accessed from Budadiri which is quite steep with a climb of 1600 m on the first day; the Piswa trail which starts from Kapkwata near Siam is gentler. For the less ambitious persons, there are alternative walks, ranging from easy hikes to hard climbs.

Numagabwe cave is within walking distance of Budadiri. The tourism office in Mbale or Budadiri can avail maps or suggestions to suit ones requirements. The climb is straightforward and can be accomplished easily by non-mountaineers. The trail is steep in places but it is possible to reach the Caldera and return to the road head within three days of setting off walking at a comfortable pace. With an extra two days one could also reach Jackson’s Summit on the highest point, Wagagai, or visit the hot springs at the head of the Suam Gorge.

This is one of the alternatives and most accessible and easy mountain to climb in East Africa throughout the year. With Wagagai peak which is the highest peak at (4,321m) in Mountain Elgon can be reached in 4 days walk/climb to the top. Climbing Mountain Elgon does not require special experience or equipment. There are two (2) major trails such as the Sasa trail, accessed from Budadiri which is quite steep with a climb of 1600 m on the first day; the Piswa trail which starts from Kapkwata near Siam is gentler. For the less ambitious persons, there are alternative walks, ranging from easy hikes to hard climbs. Also, we do have the Sipi trail which is developing.

The Sasa trail is the shortest and tough route to the peak and it starts from Budadiri. It takes you through the community land via the farm fields and plantations, also explore the BaMasaba cultures and settlements. The same route will also take you through the largest areas of bamboo forests walking through the Jackson’s pool to Wagagai peak.

The Piswa trail is long and gentle pass and needs at least 7 days to reach the peak costing 49km to and from the peak. It starts from Kapkwata villages near Siam which is gentler. The trailpasses through the northern side of the Mountain and visitors will be able to view soft woodland plantation up to the podocarpus forest. Clients will also be able to see a lot of wildlife, views of Karamoja plains in Uganda and Nandi and Kapegura hills in Kenya and it also passes via the hot springs to the caldera and the peaks.

The Sipi trail which is the longest trail covering 56km to and from the peak and it starts at Kapkwai Forest Exploration centre at 2,050m above sea level. It passes via the northwestern side of the Mountain and clients will b e able to see the Tutum cave to enter caldera and then you reach the wagagai peak. The trail starts gently but it becomes tough on the third day from Kajeri camp.

The four day Elgon hike can start from Budadiri Bumasola to Sasa River Camp which is about 1,110m walk, then from Sasa River Camp to Mude Cave Camp, then yu will climb the Wagagai Peak then back to Mude cave and finally you will descend from Mude Cave (3500m) to Budadiri (1,250m).

Mountain Elgon offers a good experience of all types of hikers. It offers both long and short hour hikes for example on Mountain bamboo trail, visiting Khauka caves and short day hikes in Budadiri.

The Mountain bamboo hikes covers 7km to Kapkwai caves which pass via tropical and bamboo forest. It offers the opportunity of viewing primates, birds and rare trees like Elgon teak and Elgon Olive. Clients can also visit Chebonet falls which can covers a distance of 5km, Kapkwai caves for 3km via the ridge view trail and also the Tutum cave for a distance of 11km and there is option for camping overnight on the Mountain slopes.

Visiting Khauka Cave takes 3-4 hours in Wanale and you can also head to Nabuyoga loop where can have a clear view of Jackson’s summit and wagagai peak.

Short hikes can also be done and clients can be able to visit Mudagi Cliffs, Sasa River Cam and Drigana lower falls. This route is favorable for bird watching, Nature walks and overnight camping.

With the farming culture on the slopes of Mountain Elgon, visitors to this place will come to find out where the Arabica coffee comes from in Uganda. As it is grown on the Mountain Shambas (cultivated grounds) of Mountain Elgon, the Bagisu and Sabinyu have a reputation of producing Arabica coffee both in Uganda and Kenya side. Arabica coffee has also been named as Sipi or Bugisu by the farmer or locals in this area. The guided walks can be organized through the coffee plantations and farmers will demonstrate to you how plant, pick the coffee, grind, store and also washing the coffee.

Clients will also be in position to learn about the lives of the Sabiny tribe as you meet and interact with the local people and also participate in traditional weaving, learn how they prepare the African Cuisines, cooking and tasting the local foods or dishes. You can also visit the handcraft shop around the area to support the locals, visit schools and help the orphan students if you are able to help.

The Budadiri community walks ecotourism experience offers accommodation, car hire, cultural dances, guided coffee tours and community nature walks. So visitors can engage in these activities once in Mountain Elgon especially they will explore the region’s cultural dances, food preparation, folklore and its famous malewa bamboo shoots.  Malewa is the preferred source for the Bagisu people and it is so delicious when it has been prepared.

Visitors can also tour the Arabica coffee processing plants which support the produce of the local farmers and also nature walks can be organized to explore the cultures of the locals in three different trails; Namugabwe cave trail will expose visitors to the BaMasaba lands and plantations up to the historical cave which is filled with bones, Dirigana Loop trail can lead one to Dirigsana waterfalls and Gabushana cave via the local markets and the “Walls of Death”.

A mountain biking trail runs from Sipi trading centre to Chema Hill in Kapchorwa town. It should take 1.5 hours and provides views of various waterfalls and the Karamoja plains.  Bikes can be hired from Sipi River Lodge.

A mountain biking trail runs from Sipi trading centre to Chema Hill in Kapchorwa town. It should take 1.5 hours and provides views of various waterfalls and the Karamoja plains.  Bikes can be hired from Sipi River Lodge.

Mountain Elgon National Park can be accessed via Kampala, Jinja and Mbale road then Mountain Elgon. It covers 230km and 5 hours drive to reach Mountain Elgon National Park on a safari vehicle. This route offers visits an opportunity to visit Sezibwa falls which has culture related to Buganda Kingdom, Mabira forests for nature walks and Zip lining and also White water rafting in Lake Victoria around Jinja town, Boat cruise to visit the source of Nile among others activities in Lake Victoria around Jinja town.

ACCOMMODATION / WHERE TO STAY

Accommodations are available in Mbale town and Kapchorwa town.