Semuliki National Park is located in the western region of Uganda just beneath and on the far side of the northern tail of the Rwenzori Mountain ranges. It is situated in Bwamba County, a remote area in Bundibugyo district and it is 52km from Fort Portal tourism city. It is the newest park in Uganda to be created and from 1932 to 1993; the park area was protected as a forest reserve by the colonial government and Uganda government forest Department. In 1993, the reserve was upgraded into a national park hence Semuliki National Park purposely to protect the forest as part of the protected areas of the western Rift Valley. However the park is currently managed by Uganda Wildlife Authority. 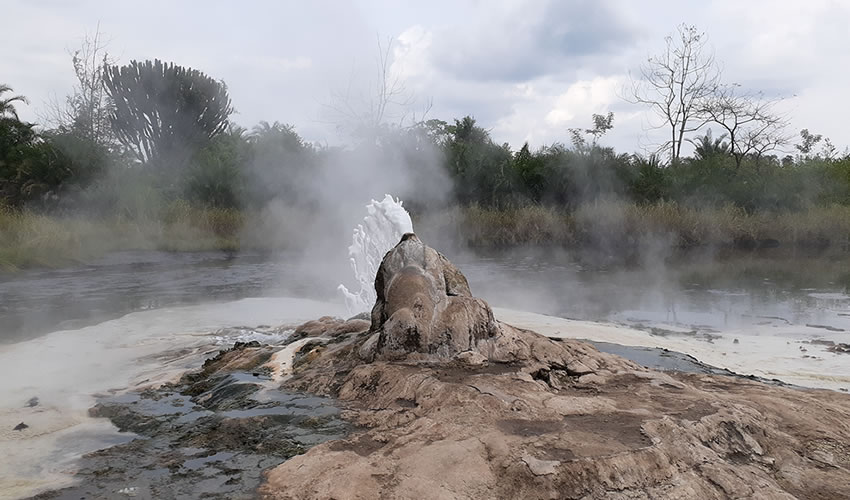 It is mainly very dense tropical lowland forest but with some grassland, wetland and bamboo forest. The terrain is quite flat, and the Rwenzori range forms a backdrop to the east. Visitors are advised to come prepared with waterproofs because it rains a lot. The Semuliki River defines the border with the Democratic Republic of Congo, and several tributaries run through the park, providing watering places and good spots to observe the animals.

There are also Sempaya hot springs, and these attract birds and animals using the salt licks. Sempaya hot springs are the most famous attraction in the park. They are commonly known as the male and female springs. One of the springs resembles a geyser by forming a 0.5m high fountain.

The various habitats attract a wide variety such as 53 mammal species in listing elephants, Buffaloes, leopards, civets, scaly-tailed flying squirrels and bush-babies. Primates are well represented, with 8 species reported and more than 441 bird species and 300 butterfly species have been observed. 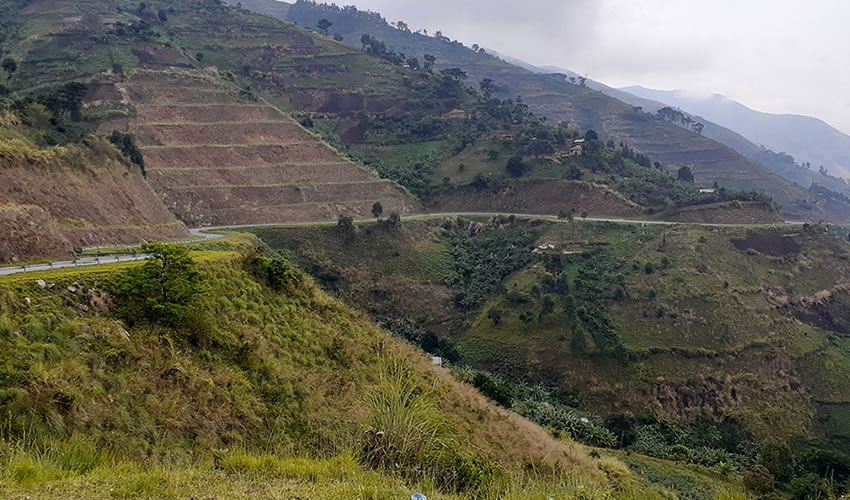 A trail around the park takes in the hot springs, and excursions to other areas can be arranged through the park headquarters at Ntandi, which is on the road from Fort Portal to Bundibugyo, situated just outside the park boundaries.

The unique Pygmies near Ntandi Village about 5 km further along the road have a unique culture and heritage. They lived a life as hunters and gatherers. Semuliki is a very dense forest and part of the great Ituri Forest that stretches in the DR Congo. It is the only park in Uganda composed primarily of tropical lowland forest and East Africa at large. The land is quite flat, creating a startling contrast to the rugged Ruwenzori Mountains nearby.

Jungle life in Semuliki National Park Uganda is breathtaking especially for birders, primatologists, ornithologists and botanists. The journey to the Semuliki Valley is always on the road 52Km Northwest from Fort Portal to Bundibugyo. It skirts the northern spur of the Rwenzori Mountains and in clear weather provides a good view of the Kijura Escarpment and Lake Albert to the north, and the Semliki River Valley to the Northwest.

Semuliki National Park is quite confusing. There are two different parts: the Semuliki Valley Wildlife reserve and Semliki Valley National Park. The Wildlife reserve is the oldest protected area in Uganda and was previously known as the Toro Game reserve. It is unique, gifted with geographic barriers that have formed a natural haven for wildlife such as the Uganda kobs, Buffaloes etc. Our tourists stand a chance of seeing a leopard, if they embark on a night game drive.

Guided walks to observe the wildlife, birds, Chimpanzees is very possible. Some of the Chimps are habituated for research. Bird life is abundant with over 400 species of birds recorded. The Wildlife reserve is one of the best places in Uganda to see the rare shoebill stork, most easily viewed from a boat on Lake Albert. Sport fishing for Nile Perch, Tilapia is excellent. 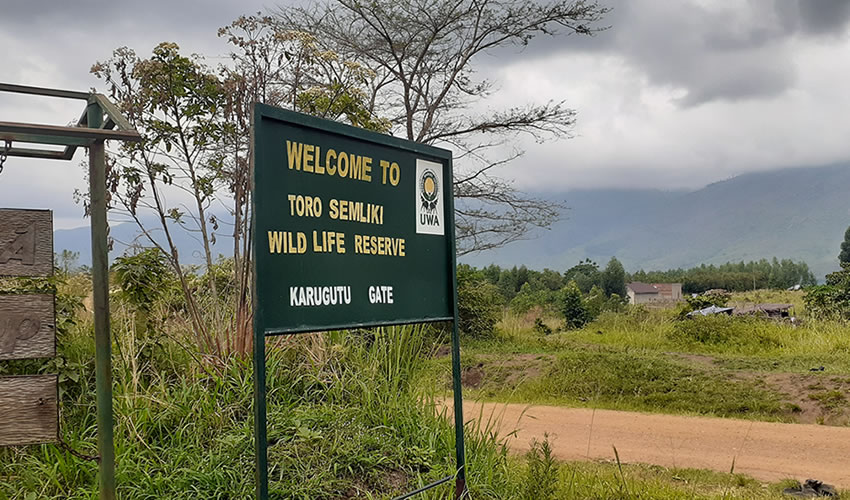 Semuliki National Park Uganda is popular for its Sempaya hot springs. The park lies on 220 sq Km in Bundibugyo district, on the far side of the northern tail of the Ruwenzori. The Semliki River defines the border with DRC, and several tributaries run through the park, providing watering places and good spots to observe the animals. The hot springs attract birds and animals using the salt-licks. The various habitats attract a wide variety of wild-life, including forest elephants, Buffaloes, sitatungas, leopards, civets, scaly -tailed flying squirrels and bush babies. Primates are well represented with 8 species, over 400 bird species and 300 butterfly species have also been observed. Semuliki is unique alike all Uganda National Parks.

On special request, a visit to the pygmy community of the Batwa is memorable. It offers an insight on the way of life of the short people back then and today.

Sempaya Hot Springs is a mosaic of different micro habits which provide for a wide diversity of wildlife and hot  water experiment at this hot spring, will show visitors how fast it can boil eggs and Matoke (Bananas). The Semuliki River is a favored watering point for many animals resident in the park. 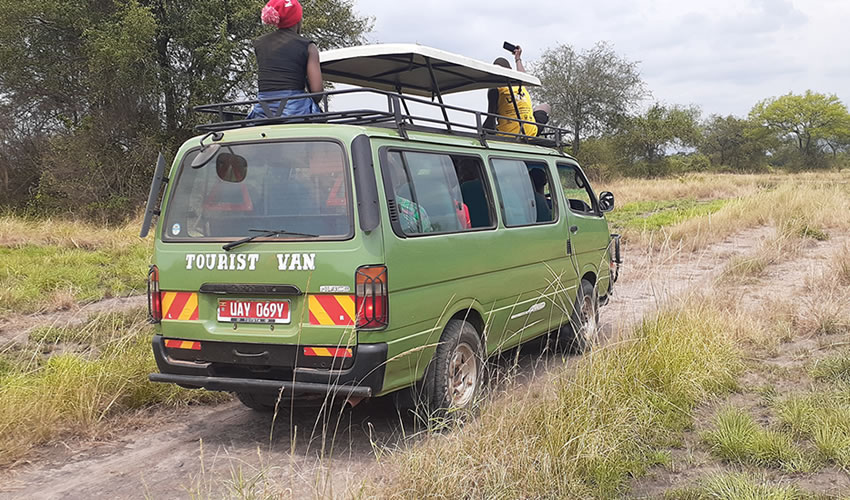 Game drives take 3-4 hours and they are done at Toro Semuliki Wildlife Reserve while at Semuliki National Park. There are three trucks which cross the Toro Semuliki Wildlife Reserve and are designated for game drives on this open savannah grassland. Commonly spotted are smaller and larger savannah elephants, Buffaloes, waterbuck, crocodiles, warthogs and Uganda Kobs. If you are lucky, pygmy hippopotami, leopards and elusive bushbabies can also be spotted while at Semuliki National Park. Game drives are done in the morning from 6:00am, evening from 3:00pm and Night game drives for nocturnal species like the white-tailed mongoose.

With over 400 bird species spotted at Semuliki National park makes it a perfect place for bird watching for those who make it to this park. The bird watching activity is commonly done at sempaya and Ntandi area which provides a clear view of the birds with many bird species concentrations in these places and they include the White-crested Hornbill, Red-billed Dwarf Hornbill, Piping Hornbill, Yellow-throated Nicator, Great blue and Ross’s Turacos, Congo Serpent Eagle, Long tailed hawk, Nkulenga Rail, Black-wattled Hornbill, Lyre-tailed honeyguide, Ituri Batis, Maxwell’s Black weaver, Red-billed Helmet-shrike, Swamp Palm Bulbul and Crested Malimbe. Also Kirumia River and Lake Albert is a spot for the Shoebill stork with other water bird species like

There are three major trails for hiking and nature walks at Semuliki National Park and they include the Kirumia trail, Red Monkey truck and Sempaya Nature trail.

Kirumia River trail takes 8 hours and the walk starts at exactly 8:00am in the morning. The walk is for 13km through the middle of the forest to Semuliki River and the trail is perfect for bird watching however primates are also spotted on this very trails. Bird species expected included African Piculet, long-tailed hawk, red-sided broadbill, black-faced rufous warbler and lemon-bellied crombec among others.

Red Monkey trail costs 11km on the eastern border of the park to Semuliki River. It exposes visitor’s t many primates’ species, Buffaloes, and elephants with many bird species compared to the Sempaya trail.

Sempaya nature trail takes 2-4 hours and it can be done either in the morning hours or afternoon depending on the time schedule. The trail stretches for 8km.

Sempaya hot springs originate from Semuliki River and they are both the male and female hot spring. The hot springs gathers a lot of animals especially the Antelopes and warthogs including very many bird species.

The water at the hot spring boils up to 100 degrees Celsius and they are 30 minutes walk in between the female and male hot spring. Clients can boil eggs and bananas in less than 10 minutes to experience the beauty of the wonderful hot spring.

The name Sempaya Hot spring originate from a Kiswahili word known as “Sehemu Mpaya” meaning the “difficult place” and it dates back in days when the construction team faced the challenging steep rock and terrain during the construction of the Fort Portal Bundibugyo road along the ridges of the Ruwenzori Mountains.

However, the locals of Bamaga Clan at Semuliki National Park have a different story from the folk lore in regards to the formation of Sempaya Hot springs.

Depending on Bamaga Clan, the formation of the male hot spring dates back in the days when the Bamaga women had gone to collect firewood from Semuliki forest. They saw a hairy man dressed in bark cloth holding the spear with dogs moving in a zigzag formation around the very location where the hot spring is situated currently. These women got scared and ran back home to tell their husbands on what they had seen. Their husbands decided to pick the hairy man and take him to their home and later they got for him a wife from the same village.

The hairy man was named Biteete and he continued hunting in the forest but one day, the man never came back home from the forest. After three (3) days, the Bamaga men went to search for him until when they reached at the current location of the male hot spring and they only found the spear but the man was nowhere to be seen with his dogs.

This is the clear reason why the people from Bamaga clan perform annual rituals at the Sempaya hot springs in honor of their ancestors and they are officially allowed by Uganda Wildlife Authority.

The Batwa people who are also called the pygmies inhabit the Semuliki National Park. They used to depend on the forest for food, shelter, medicine from medicinal plants and other tools. Their lifestyle has changed since they were displaced from the forest to protect wildlife for tourism purposes. Tourism and Uganda Wildlife Authority has offered the alternative source of income to the Batwa people through performing dance and music to tourists at Ntandi. On top of that they also make handcrafts for sale and we highly recommended visitors to always support them to earn a living for your Uganda safaris to Semuliki National Park.

In addition, a cultural village is being built so that the Batwa people can demonstrate cultural lifestyle back in the days while in the forest.

To reach the park, it takes 2 hours from Fort Portal, on the Fort Portal-Bundibugyo Road. It is accessible by public transport from Fort Portal city. The hot Springs are located at Sempaya, and the headquarters are closer to Bundibugyo at Ntandi.

Domestic flights can be organized to Semuliki National Park. Clients can embark from Entebbe International Airport to Semuliki airstrip which takes on 2 hours on the air to disembark at the airstrip where our driver guides will pick and take you to your accommodation. Please note that flights to Semuliki airstrip operate with a minimum of 4 people on board.

ACCOMMODATIONS / WHERE TO STAY