The Rwenzori Mountain National Park lies along the Western border of Uganda and rise to a height of 5109 meters. Here are the legendary “mountains of the Moon“, a World Heritage Site – and these incomparable, beautiful, mist-shrouded peaks provide a unique back drop to one of our most magnificent national parks.

Rwenzori Mountains National Park lies on an area of 996sq.km and covers the districts of Kabarole, Kasese and Bundibugyo in Western Uganda. It was designated as a World Heritage site in 1994 which implies that it’s conservation is therefore not only of national and regional importance but also of great international importance. 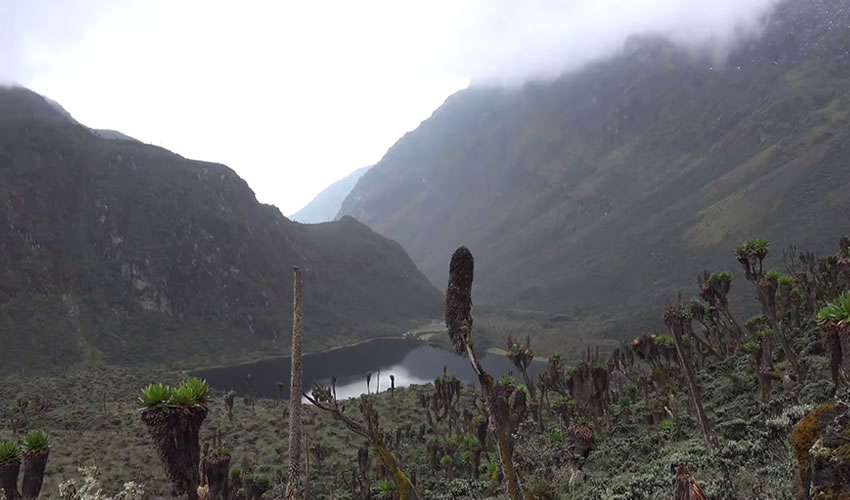 Rwenzori Mountain is one of the largest and most significant water catchment areas in Uganda. The rivers running down the mountain ranges feed the economically important lakes, Edward and George and constitute a major source of the White Nile through the waters of River Semuliki, which flow into Lake Albert.

The Mountain ranges have a combination of beautiful Peaks, glaciers, valleys, rivers, lakes and various species of flora and fauna making it scenic. Besides Rwenzori is the third highest mountain in Africa and has several high peaks including the 5th, 6th and 7th highest mountain peaks in Africa allowing it to be seen from far. Over 20 lakes are also found on the mountain. The Rwenzori Mountains National Park has stratified vegetation with five major vegetation zones, which adds on its beautiful scenery.

The highest of these peaks, and the third highest peak in Africa, is Margherita peak rising 5,109 meters above sea level. The Rwenzori Mountains were gazetted as National Park in 1991. The park covers 996 km2 of rugged mountain terrain. Whether they are experienced climbers or casual day-hikers, Rwenzori Mountain National Park offers visitors a unique experience of an Afro-Montane rain forest.

The main attraction is the luxuriant vegetation found above 3000m which includes the giant forms of Lobelia. Heather and Groundsel. Rwenzori Mountain National park is also home to the unique bird species such as the Rwenzori touraco, the handsome francolin and the olive pigeon.

Rwenzori Mountain National Park is also home to several endemic, endangered, threatened and rare species of the Albertine Rift and also an important Bird Area. Some of these include the Chimpanzee, L’hoest’s monkey, Leopard, Forest elephant.

Explore the Ruwenzori Mountains National Park in Uganda. An early explorer, DW Freshfied (1906) said, “You may be familiar with the Alps and the Caucasus, the Himalayas and the Rockies, but if you have not explored Rwenzori Mountain, you still have something wonderful to see.”

In the center of the range, which boasts Africa’s third highest mountain, some of the peaks carry permanent snow and glaciers, while the lower slopes do not call for mountaineering experience, although the higher you go the fitter you need to be. Excellent walking routes, including the Bujuku circuit are provided through wonderful and unique scenery. For those who want to attempt a climb, several peaks provide challenges that match those in the Alps. 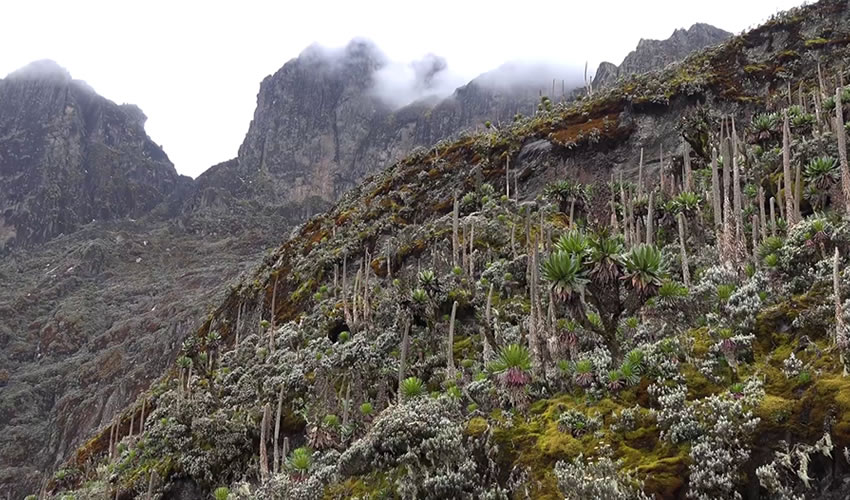 These fabled mist-covered “mountains of the moon” 120 km in the length and 48 km in width, were formed from block which was thrust up during the creation of the Western arm of the Great East African Rift Valley. At the Centre of the range, there are six peaks carrying permanent snow, three with glaciers.

In the 300 AD, the Alexandrian geographer Claudius Ptolemy suggested that the Nile had its source from snow peaks on the Equator, the “LunusMontae” or “Mountains of the Moon”.
The Mountains of the Moon and other mysteries or the African interior were finally revealed to the world during the 19th century when explorers penetrated the region.
In 1888, Henry Morton Stanley while on expedition at the shores of L. George sighted the snow capped peaks. Early mountaineers, most notably the Duke of Abruzzi in 1906, fighting upwards through dense forests of trees and bamboos, discovered a surreal landscape in which fantastic vegetation surrounded spectacular lakes and equatorial glaciers flowed down from the snow capped peaks.

The Rwenzori Mountain is suitable for almost all climbers and walkers who are reasonably fit. There are hiking routes in the foot for those with no climbing experience-all that is needed is a little stamina and waterproof clothing. More demanding is the ascent of Mountain peak, which is a simple glacier requiring limited mountain experience. Kindly inquire with the African Pearl Safaris tour manager for the best times to visit the Mountain Rwenzori and what you need to carry on your hiking trip. You should allow about 10 days for the trip and the most popular route should take about six to seven days. It is possible to break the route up with more frequent stops.

Rwenzori mountain national park is the best spot for hiking and nature walks experience.  There are demarcated trails for all hikers and nature lovers to Rwenzori Mountain at central circuit zone. Lake Mahooma and Buraro chimp forest trail includes community walks to kichamba up to Karangura ridge and also hiking to Bundibugo area via Bwamba pass is massive and enjoyable.

The guided forest walks and hiking can also be done in the communities of Ruboni and Turaco view just outside the park boundaries. So clients can walk along Mubuku River and they will be able to view Baker and portal peaks as the visitors will hike up to 2,300m above sea level. Along this route clients will have an opportunity to see chameleons, squirrels, vervet monkeys, birds and on the clear day, you will be able to view the snow capped Margherita peak (5109m).

Bwamba pass gives an opportunity of visiting the bamboo forest, Rwenzori villages and superb rift valley views. This is the most direct pass between Fort portal and Rwenzori Mountain even before the road from Fort Portal to Bundibugyo was built in 1938. It offers a tough hike over the northern Ruwenzori ridge

This is one of the memorable experiences while in Uganda for mountain climbers and there are two scenic routes (The Central Circuit trail and Kilembe trail) to reach at the highest peak (Margherita Peak) which is the third highest peak in Africa with 5109m above sea levels. The trails pass through glacial lakes, heath forest, alpine plants, lush valleys, bogs with a lot of lobelia and finally the snow.

The central circuit trail is challenging and most preferred trail for senior climbers and it involves acclimatization before attacking the Margharita peak and involves climbing from Nyakalengija Office (1,646m) to Nyabitaba Hut (2,652m) for 10km after the briefing from Nyakalengija office, then continue climbing from Nyabitaba Hut (2,652m) to John Matte Hut (3,414m)  for 7km in your second day, also climb from John Matte Hut (3,414m) to Bujuku Hut (3,962m)  for 6km on the third day, then from Bujuku Hut (3,962m) to Elena Hut (4,430m) for 4km on your fourth day, from Elena Hut (4,430m) you will climb to Margherita peak (5109m) for 2km one way and get back to Elena hut on fifth day, sixth day climb from Elena Hut (4,430m) to Guy Yeoman Hut (3,261m)  for 8km, then from Guy Yeoman Hut (3,261m) back to Nyabitaba Hut (2,652m) for 6km and lastly from Nyabitaba Hut (2,652m) back to Nyakalengija (1,646m) for  10km. generally, it needs 7 days and 6 nights while exploring the Rwenzori Mountains National Park

Kilembe trails ascend through the southern parts of the Rwenzori Mountains from Kilembe, a place near Kasese town. The route passes via Nyamwamba valley, glacial lakes with beautiful scenary points before joining the central circuit at Lake Kitandara and visitors will be able to see Mountain Baker while on this particular route.

Ruboni village is a perfect place to explore the Bakonzo people on the slopes of Rwenzori Mountain National Park. The word Ruboni means clear water in Lukonzo language.  You will be guided on the walk to this village with of Bakonzo people through their farm lands. Visitors will discover their animals, crops, how they prepare food from fresh ingredient, see the cultural dances, traditional customs, and hear their folklore.

The guide will also take you along the rocky Mubuku River and you will be able to see the villagers carrying crops, woods and also your guide will point several bird species along this route among which they included Rwenzori Turaco, tiny sunbirds and Cinnamon-chested Bee-eaters. There are also chameleons, squirrels and vervet monkeys.

The best period to hike the Rwenzori Mountains ranges from Mid December to end of February and also June to early August since climbing during the rainy season is difficult because mud of bogs will be steep and rocks will be iced.

All the equipments below can be rented on a prior request

Rwenzori Mountains National Park is accessed by road from Kampala via Mbarara to Kasese or from Kampala through Fort Portal. Alternatively, chartered planes are available from Entebbe to Kasese and then by road.

ACCOMMODATION / WHERE TO STAY

Accommodations are available in Kasese and Fort Portal and some of them include.

© 2022 African Pearl Safaris. All Rights Reserved.
You cannot copy content of this page
Back To Top
×
mersin eskortmersin eskort